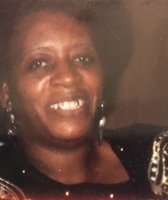 Callie V Luckey Washington 76 years of age was born May 28, 1944 to the parentage of the late Oscar and Maxine Luckey, in Marietta, TX. She attended school in Floyd Valley and Panhandle Community. She was employed by Day and Zimmerman and Jordan health care service until she retired.

Ms. Washington married Robert L. Washington in September of 1964. To this union four children were born 3 daughters and 1 son. She was united with Floyd Valley Baptist Church at an early age and until  her health failed her and she moved to Fort Worth, TX.

10 sweet grandbabies that knew her as MeMama