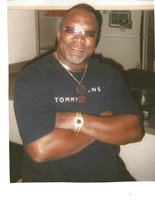 Earnest James Roberson SR "Fresh" Born October 30, 1957 in Linden, Tx to the Parentage of Mr Jim Roberson and Mrs. Floriene wicks Roberson. Mr. Roberson passed away January 19, 2021 at his home in Wilton, AR. he was employeed in Direks, Ar where he worked in the warehouse, was also employed with Cooper Tire in Texarkana, Ar where he retired after 20 years of employment. Mr Roberson was also in the Military where he was a Marine and recieved many rewards for his service such as Expert Rifle Badge, and good conduct, his Military learning was Basic Engineering equipment Mechanic. He retired from the Marines Febuary 2, 1984 with an Honorable discharge. He was also Vice President of a Riding club (HTR) Hooks Trail Riders from Hooks, TX where his club name was "Fresh." He was Married to Carroll "Dixie" Jean Cheatham Roberson and was a son, a Father of three sons, one daughter in law, and two daughters, eleven grandchildren and one great grandchild, brother to one sister. He is proceeded in death by his Father Jim Roberson.

He leaves to cherish in his memories:

and a number of family, friends, and trail riding family