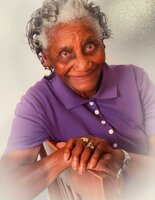 Mrs. Rena Mae Brown-Smith was born December 30,1924 in Garland, Arkansas to the late Lewis and Littie Brown. She was affiliated with the St. Matthews Baptist Church in Foreman, Arkansas under the Pastoralship of Ronnie Kenner. She worked many years at Mountainair Poultry. She was also a Retired Custodian from the Foreman High School. She loved being around her family and she will be greatly missed. She was preceded in death by her husband; Will Henry Smith, Parents, 1 Brother; James Brown, 4 Sisters; Mary Ann Montgomery, Exie B. Hamilton, Lucille Parker and Nellie Jean Hooks.