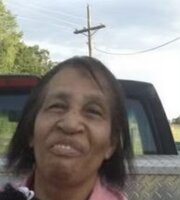 Ms. Melvina Williams, seventy-two, was born on February 18,1949 in Carthage, Texas to the parentage of Nelzie Lee Tilmon and Johnny V. Williams Sr. She departed this earthly life on October 30,2021 at a local Nursing Home in Texarkana, Texas. She was preceded in death by her Parents, one sister; Mae Helen Williams and two brothers; David Williams Sr and Aaron Williams Sr.

Along with many other relatives and friends.

Ms. Melvina will be missed beyond measure.