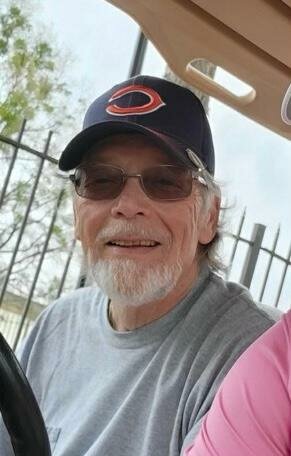 Please share a memory of John to include in a keepsake book for family and friends.
View Tribute Book

John was born July 27, 1956, in Chicago, IL, the son of John Robert and Chloie (DeSelm) Brown.  He was raised in Illinois and lived most of his life in Lake County, IL graduating from Waukegan High School in 1974, then enlisting in the Marines from 1974 -1978.

Survivors include two children: a son John Matthew (Brittany) Brown of Murrieta, California and a daughter, Amy Elizabeth Brown (Mike Weber) of Ogden, Utah; and two sisters Cheryl (Robert) Paul of Crossville, Tennessee, and Phyllis Brown (Ray Rowan) of Salina, Kansas.  He is also survived by several nieces and nephews, along with several great-nieces and great-nephews.

He was preceded in death by his parents and his ex-wife Laurie Moneyhon, the mother of his children.

John retired from Deublin Company, Waukegan, IL, in 2016 after 37 years of employment.  After retiring he relocated to Texarkana, Arkansas then Texarkana, Texas to enjoy his retirement by bowling, playing golf, fishing, and riding his Harley-Davidson motorcycle.  He also enjoyed his occasional trips to the casino.  Though he relocated to Texarkana, John remained a loyal Chicago sports fan, always rooting for the Chicago Bears and cheering on the Chicago White Sox.

John leaves behind many friends and loved ones in Illinois, Tennessee, Arkansas, and Texas.

A special thanks to Dylan Bigham at The Links Pro Shop, Trystin Reed at The Legacy at Pleasant Grove Apts., and Officer Taylor with the Texarkana TX Police Department.

Final arrangements were made by Richardson Hill Funeral Home in Texarkana.

To plant a beautiful memorial tree in memory of John Brown, please visit our Tree Store

Look inside to read what others have shared
Family and friends are coming together online to create a special keepsake. Every memory left on the online obituary will be automatically included in this book.
View Tribute Book
Services for John Brown
There are no events scheduled. You can still show your support by planting a tree in memory of John Brown.
Plant a tree in memory of John
Share Your Memory of
John
Upload Your Memory View All Memories
Be the first to upload a memory!
Share A Memory
Plant a Tree
Contact